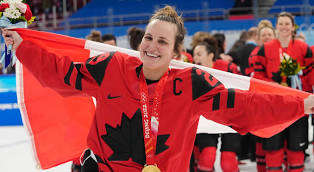 Canadian Athlete Of The Year

Marie-Philip Poulin has been named the winner of the 2022 Northern Star Award, granted to the best Canadian athlete during the calendar year, as voted by a cohort of sports writers and broadcasters across the country.

It’s the first time the award — formerly known as the Lou Marsh Award — was granted to a women’s hockey player. Poulin submitted another tour-de-force season, leading Canada to the gold medal at the 2022 Olympics, where she finished second in tournament scoring behind teammate Sarah Nurse with six goals and 17 points in seven games, while notching two goals in the gold medal game against the United States. Poulin became the first player — both men or women — to have scored in four consecutive Olympic finals.

Poulin wasn’t finished there. She captained Canada to another gold medal at the 2022 IIHF Women’s World Championships, where she recorded 10 points. During a time where women’s hockey has nearly unparalleled depth, she stands above them all as the best player in the sport. Poulin frankly should’ve won this award before and she now sits among Angela James, Hayley Wickenheiser, Cammi Granato and Geraldine Heaney as the best women’s players of all-time.